Are you relocating in Finland with your family? Have you studied in English before? Will you complete 9th grade this year? If, this is for you 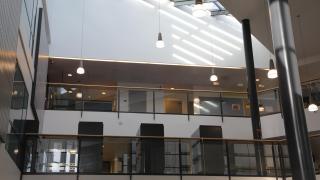 Every applicant must go through the Finnish national secondary level application procedure (Studyinfo.fi). Do NOT choose Finnish school leaving certificate if you don’t have one.

In addition, the applicant sends their latest school report and their application form to Tikkurilan lukio either via mail (Saara Pietinen, Tikkurilan lukio, PL 4515, 01030 Vantaan kaupunki, Finland) or as a pdf document via email to saara.pietinen@vantaa.fi by March 21 at 15.00 (Finnish time). The name of the pdf file should include applicant's first name and last name. The school sending the forms should mention application form in the subject field.

Pre-DP applicants from abroad do not send the appraisal form and they do not attend the entrance exam. Tikkurilan lukio has no quota for students applying from abroad but every applicant is individually considered.

Please note that we only admit pre-DP applicants who were born in 2006-2008 (10th year) and who have a legal guardian in Finland. The guardian must hold either Finnish citizenship or Finnish residence permit.‍ For those who were born in 2005-2007, it is possible to apply to both pre-DP and to DP1 if they will have been in school ten years by August 2023.

Amharic A, Arabic A, Bosnian A, Bulgarian A, Catalan A, Chinese A, Croatian A, Czech A, Danish A, Dutch A, Estonian A, French A, German A, Hebrew A, Hindi A, Hungarian A, Indonesian A, Italian A, Japanese A, Korean A, Latvian A, Lithuanian A, Macedonian A, Malay A, Modern Greek A, Nepali A, Norwegian A, Persian A, Pilipino A, Polish A, Portuguese A, Russian A, Serbian A, Sesotho A, Sinhalese A, Slovak A, Slovene A, Spanish A, Swahili A, Swedish A, Thai A, Turkish A, Vietnamese A, Welsh A